Gas Dryer vs Electric Dryer – Which one is best?

Haven’t thought about it? That’s okay, that’s what we’re here for.

Today we’re going to take a quick look at how gas and electric dryers stack up against one another.

We’ll examine all of the important factors to consider so you can make an informed decision.

We’re talking about start-up costs, running costs, how well they perform and how much energy they’ll end up using.

For each category, we’ll declare a winner, then pick an overall winner.

Ready to find out? Let’s get started.

So your old dryer has broken down and you’re in the market for a new one.

You’ve got both power and gas connections in your home and are considering switching from an electric dryer to a gas model.

The first thing you’re probably concerned about is: “how much is this gonna cost me?”

Purchasing an electric dryer might run you something in the range of $500, which isn’t that much considering how much you’re going to be using it.

However, if you’re looking to make the switch you’re probably going to be charged a bit more.

Even the cheapest model listed on AppliancesOnline is going to run you upwards of $1500, which is three times the price of the average electric dryer.

So when it comes to initial costs, the winner here appears to be the electric models.

Generally speaking, gas is a bit cheaper than electricity, especially given the price of power right now.

When it comes to dryers this rule of thumb holds up.

A gas dryer will typically offer lower running costs than an electric dryer, often times by quite a margin.

According to Canstar Blue, you might be looking at about $85 to $100 in yearly running costs when you purchase a gas dryer.

However, you might be looking at triple that to run an electric dryer, anywhere around $300.

In fact, gas dryers, despite being more expensive initially, will eventually recoup their start-up costs within 7 years, with the savings they generate.

A win for gas dryers.

Sometimes you’re in a real rush to get your laundry taken care of.

Waiting for a while for your clothes to dry can get pretty frustrating.

So when it comes to gas vs electric dryers, which one will dry your clothes the quickest?

It has also been noted that gas dryers, as opposed to electric ones, tend to be gentler on delicate fabrics.

This is great news if you have a lot of lace underpants to wash.

So when it comes to performance, we’re chalking up another “W” for the gas dryer.

These days energy efficiency is a big selling point for a lot of people.

Dryers have long been touted as one of the most costly appliances to run, burning through power like you wouldn’t believe.

So which one is generally regarded as being more energy efficient?

Once again the winner is gas.

Gas dryers use about 50% less energy to run than your standard electric models.

It’s also well known that gas is much more efficient to begin than electricity, as well as being cheaper and somewhat better for the environment.

And overall the winner is…

So with gas dryers winning out in 3 out of our 4 categories, it seems we have to declare them the winner!

If you’re not too worried about the start-up costs, gas wins on performance, running costs, and energy efficiency.

There are a couple drawbacks to making the switch from electric to gas dryers.

For starters, and this might go without saying, but you need to have a gas connection to install a gas model.

Secondly, a gas model also must be professionally installed, because they need a vent to the outside.

However, if you’ve got all this, and have the money to afford the startup costs, long-term going with a gas could be the way to go!

Impressed by the gas dryer? We can help you there too…

If our article has convinced you to switch from an electric to a gas dryer, wouldn’t it be great if you got that gas at a sharp rate?

Electricity Monster can help you into a great rate on your power, but your gas bill is worth considering as well.

If you’re interested in saving on gas, give us a call, we might be able to find you a new deal.

Get in touch with us today, our process is Fast & Easy, one of our professional brokers will guide you through the whole process. 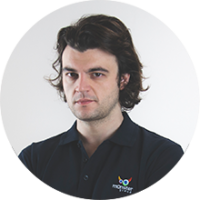 4 thoughts on “Gas Dryer vs Electric Dryer – Which one is best?”